Deprecated: Function Elementor\DB::is_built_with_elementor is deprecated since version 3.2.0! Use Plugin::$instance->documents->get( $post_id )->is_built_with_elementor() instead. in /home/marketin/domains/marketing360.in/public_html/wp-includes/functions.php on line 5383
 The Rise of Netflix - Skip to content 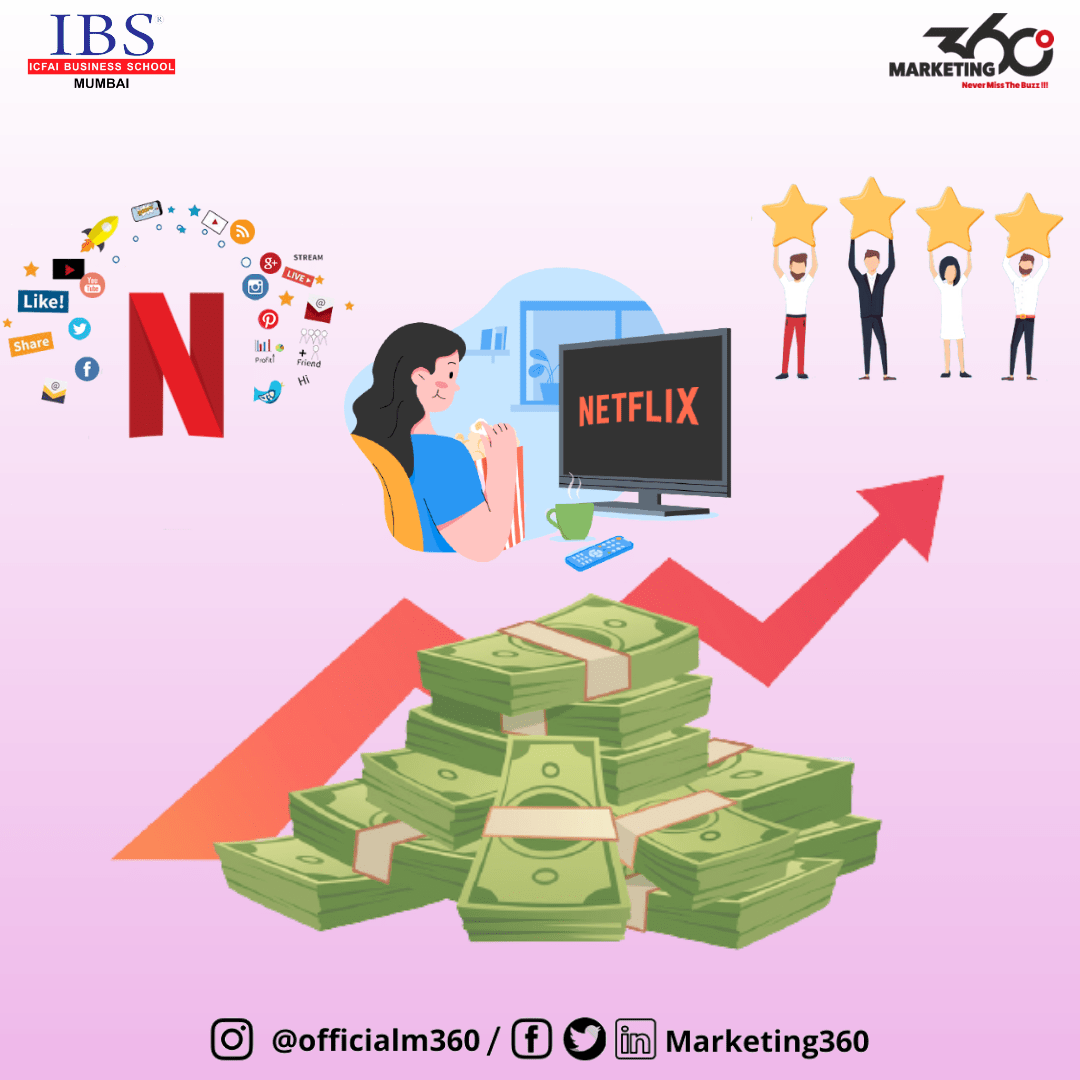 Netflix is an Over-The-Top (OTT) streaming service that offers a wide array of TV shows, movies, documentaries with web-connected devices. Initially, it operated by renting DVDs. It got a major advantage when it introduced the video streaming service in 2007. The company has grown extensively from being in DVD rental service to the king of original content in the industry. They have reached 150+ million subscribers and operates in more than 190 national markets. It’s’ capacity to understand consumer preferences and viewing patterns in their business model gives them an edge over its competitors.

Some of the factors that contributed to the epic rise of Netflix are:

Previously, Netflix had no plans to become the first avenue in the industry where movies, TV show or broadcasting networks were beamed. They looked upon shows and movies which had their second, third or fourth run. Subsequently, the company realized it needs more content to appeal to its customers and started working on the same. After some time, content owners raised their fees and, in some cases, cancelled their licence agreements. HBO and other big cable companies refused to collaborate with Netflix. Reed Hastings – CEO of Netflix, initiated to invest in their original shows by offering producers with upfront contracts to create an entire season or 2. It provided a loyal fan base to Netflix. This led to appreciation from its user base and its stock price increased.

Netflix believes in giving what the subscriber is looking for and retaining its customers. Thus, it was essential for the brand to know the viewing patterns and behaviours of its users. This would help them in providing subsequent recommendations. It extracted different types of data from its viewers with the help of artificial intelligence. For example – the type of genres watched; feedback; ratings; number times a show is watched, replayed, left incomplete; searched items; the amount of time spent on Netflix etc. The collected data was then further analysed and interpreted to gain insights. A lot of research and development takes place for building algorithms on similar lines for users. Algorithms are prepared in such a way that whenever you log in, it shows recommendations based on previous watching patterns. Thus, Netflix makes it easy for the users to decide which shows/movies to watch by providing personalized recommendation to them. This enhanced the overall customer experience.

The company worked more on making the original content as it was aware of what subscribers desired to watch. Netflix got an opportunity to remake “House of cards (2013)”. It gained exclusive rights for 2 seasons. It showed different trailers to different target viewers based on their previous viewing patterns. If a subscriber watched more of action movies, he or she was shown a racy, energetic version. While, if the user watched more of drama or romance, he or she was streamed a trailer which focused more on the characters. Netflix was confident about the potential viewership being substantial enough for the show to be successful. Certainly, “House of cards” became the most viewed show where Netflix offered its streaming services. Subsequently, “Orange Is the New Black” and “The Crown” added to the company’s growing progress.

Netflix gives new users a free trial for a month, which is an irresistible offer when it comes to Indian consumers. It often uses influencer marketing by making high ranked celebrities for promotions. Radhika Apte is the most seen face on Netflix. They also use e-mail marketing to promote their content. Netflix uses creative multi-channel campaigning approach as it engages in collaborations with banks, brands, Snapchat (using filters), Instagram, YouTube etc. which provide them wider audience reach. It is often seen using humour in its advertisements – “Airport Netflix Ad Campaign”.

The company seems to blend well with the Indian culture. Broadcast and cable TV’s initially followed once-a-week instalment model. Also, there were fixed timings for shows which offered limited time. This was a good time to have a hassle-free watch for your favourite shows. Netflix gave a new shape to binge-watching. It uploaded entire seasons of TV series at once to create the binge-watching trend. It supposedly forced cable TV’s to be more aggressive and flexible. Customers seemed happy with this new normal of binge-watching. Understanding the Indian demographics, Netflix also has content for all age groups from kids to adults.

The pandemic seemed to affect every industry and so did Netflix to some extent. With the impact of Covid-19, people preferred remaining indoors. Since all theatres, malls etc were shut, Netflix soon became ‘The’ viable alternative for entertainment. Netflix has seen the rise in subscription along with stock value due to the pandemic. Thus, Netflix is seen as a brand which always comes up with a bang in any crisis it faces. Serving its’ loyal customers with the best innovative services has always proven a successful strategy for the rise of Netflix.